In a rush? Slow down.
Read and be informed.
Then send an email.


Please read the three posts for much better understanding of what is involved in getting a Sanskrit tattoo and how I can be of help in your beloved project:
1. Frequently Asked Questions
2. Get your Authentic Sanskrit tattoo
3. Common Errors in Sanskrit Tattoos (This post)


So, you are all excited to get your next tattoo in an exotic, mystic language from far away in time and place - Sanskrit! Great, congratulations for your resolve.

There are many a slips, between the cup and the lips.

There are many cookie cutter websites offering standard texts for $5 (like those key-chains of popular names you find at any tourist spot. Is that what you are looking for? But when you go to any site for Sanskrit tattoo help, you should be aware of the possible errors (big and small) that are happening, and visible on the net. The errors are of two kinds - wrong or literal translation, or font/writing errors. This post should help you understand what the real issues are and how to avoid them.

A vowel when written by itself is different than a vowel that appears inside a word. There, only its mark, accent, sign, matra appears!

When multiple consonants occur in sequence, a new symbols emerges, called a ligature. Without proper ligatures the language loses all its charm.
Reasons for translation related mistakes:

Shades of meanings - Sanskrit has many words, synonyms with shades of meaning, depending on context. Words are organically formed from base root verbs, and which starting verb root one chooses can change the shade of meaning. Without discussing the context and usage of the words in the English phrase, mistakes can happen. For example, fearless can mean 'steadfast' (who is not disturbed by fear) or 'controlled self' (fear comes when one doesn't know self or control self), apart from the obvious 'without fear'. The word 'cell' can mean body cell, prison cell, a phone, a battery (in UK and Asia)!

Sound merging - Sanskrit words change forms when inside a sentence. Nearby sounds merge, and the reverse break up can sometimes be done in multiple ways, leading to confusion. Similarly, when translating a phrase into Sanskrit, these rules also need to be observed and such merging of sounds (sandhi, elision) should be done.

Sanskrit words change forms when inside a sentence. Nearby sounds merge.

Proper Names - Sanskrit is purely phonetic, much more than you can imagine in English. Each sound has one symbol, and each symbol has one sound. (True, sometimes a letter has slight variations - like old style versus new style, conjugate or not etc.). So, it is important to know how YOU pronounce the name you want to be tattoo-ed. So if you are in Finland or in Australia, your pronunciation of the same name will be different, and then it MUST BE written differently. Jack if pronounced as Jaak, must be written differently. Or Maria may be pronounced maa-ri-yaa or muh-ri-ya or muh-ri-aa or maa-ri-aa - all four are written differently.

Sanskrit is purely phonetic, much more than you can imagine in English.

Translator's accent - Sometimes, the translator's own mother tongue can bias him/her to assume a certain pronunciation. Whether or not they have visited other countries, to get used to other accents also matters. Even within India, people with different mother tongues can spell a word differently, and pronounce differently, unless they are trained in proper Sanskrit pronunciation. This is also one of the main reason for the infamous Beckham's Vhictoria tattoo.

Hindi is not same as Sanskrit - Though closely related, and Hindi being the direct daughter of Sanskrit, with a vocabulary of over 60% from Sanskrit, and using the exact same script for writing, Hindi is still different from Sanskrit. The easiest way to tell is that mostly Sanskrit words have dots (nasal 'm' sound) at word endings OR a colon at word endings (visarga, extra gust of air in speaking). This still is not enough to be confident to go to any site.

Using a translator software or dictionary - A dictionary is good to use for getting the job done, but a dictionary lists out MANY words with shades of different meaning, and usage matters. It is of great help only if you already know the language and want more choices of synonyms etc. Blindly going by an online dictionary can result in funny or serious mistakes.

A dictionary is of great help only if you already know the language.
Reasons for script related mistakes:

Different way of writing - Sanskrit words are not written just like English words, where letters stand on their own. In Sanskrit letters combine with adjacent ones based on specific rules and context. Vowels are almost always merged with consonants. Certain consonant pairs or triplets change altogether!

Different computers - Different computers can differ in many ways - what operating system (Windows or Mac or Linux)? What browser (Firefox, IE, Safari..)? Which version of browser? Within a browser what plugins are installed and enabled? Are any language specific packs installed for Windows? Is the font Unicode or older one? Unicode fonts themselves come in various flavors, Mangal being the default and one of the worst. Arial Unicode MS being one of the best.

Font rendering - This has to be do with how a font shows up on a computer. Even if someone types in Arial Unicode and sends it to you over Facebook message, you will most probably see it in Mangal or some other substitute and you will not even know that the font is messed up while rendering (See examples 5 and 8 below). When you paste this Unicode text in an image editing software, it immediately messes it up if there is any double consonant or any vowel except short ‘uh’, because image editing software don’t work on fonts where characters combine to form ligatures. For example, शक्ति will show up something like this श क् त् ि (See 5 and 8 below)

When you paste Unicode text for Devanagari script in an image editing software, it immediately messes it up.

Aesthetics - Different fonts have different aesthetic value. Just because it is in a script that you can't understand doesn't make it correct and exotic

Ligatures - Sanskrit has over 100 commonly used ligatures. Modern computer fonts don't have all, and there is also some movement to simplify it. This movement is without understanding the extremely scientific reason for ligatures formation. It is not just for beauty or exoticism. If you choose to not use ligatures, then you are losing out something very unique and important to Sanskrit.

Using online generator software - If you know Sanskrit language and script then a generator might be okay, else you may make wonderful mistakes without knowing any better. One common mistake is to type English word in the website and think it will translate and change the script as well. That is when you can end up with text that is not correct spelling of anything, i.e. it is not correct way of writing ANYTHING, not even a different incorrect word. (See examples below).

One common mistake is to type English word in the website and think it will translate and change the script as well.

The common issues with font rendering are shown below in some real tattoos on the net.


Make sure you don’t get some errors or bland text.

I am here to
provide a pleasant experience
for creating lifelong memory
of your important message -
translated authentically and
written beautifully.

And the other two important articles: 1. Frequently Asked Questions 2. Get your Authentic Sanskrit tattoo


Don't get these errors, get an image of correctly rendered fonts of correct translations. 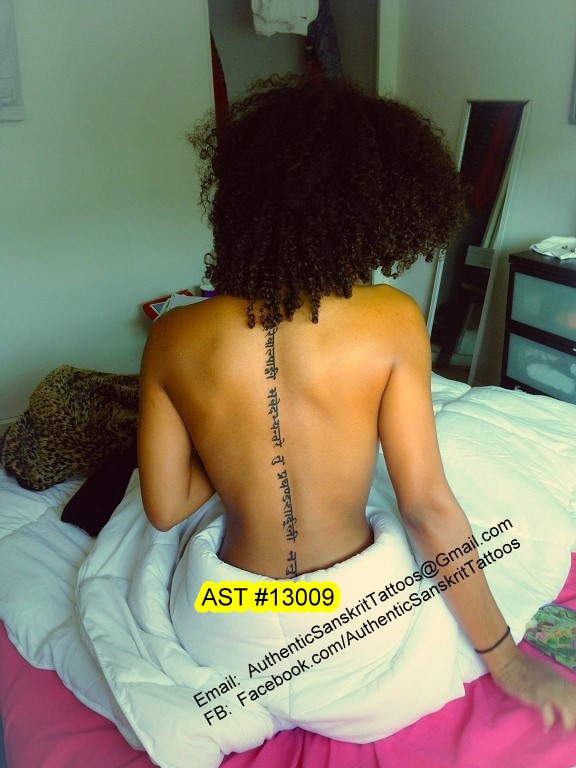 Handwritten Sanskrit tattoo - She may look small outside, but she is a fierce tigress inside 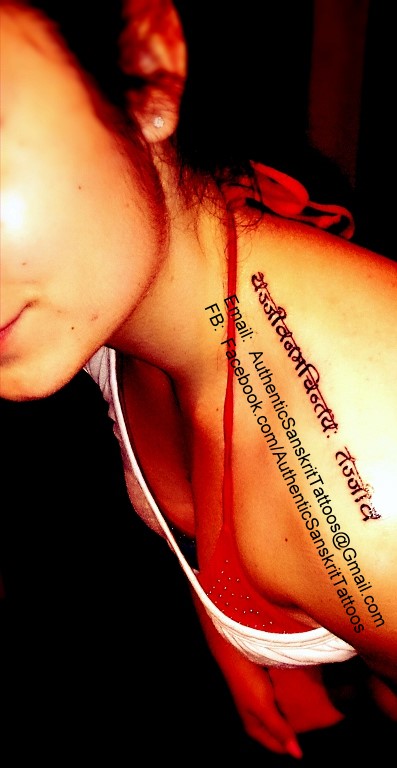 Live the life you dreamed of

QUICK LINKS TO GET YOUR TATTOO